Brian Redman: Daring Drivers, Deadly Tracks, by Redman himself and Jim Mullen, has won the Royal Automobile Club’s 2016 Motoring Book of the Year Award. It was presented at an annual ceremony held at the Club’s Pall Mall clubhouse, attended by authors, leading publishers and discerning book collectors.

It’s just the latest example of Redman – who evolved from boy racer in a Morris Minor Traveller to winning the Targa Florio road race and being three-times Formula 5000 champion – beating off stiff competition.

Some 20 books were considered by the Club’s panel of fiercely independent judges, who then met to debate the merits of six excellent finalists, all of them published between July 2015 and June 2016.

As well as Redman’s winning title from Evro Publishing – memorably described by one judge as a book on “probably the greatest racing driver you’ve never heard of” – other contenders included Squire: The Man, The Car, The Heritage by Jonathan Wood (Classic Motor Cars Ltd); the novel Fatal Pursuit by Martin Walker (Quercus); Bentley: The Vintage Years by Clare Hay (Number One Press); Maserati 250F: The Autobiography of 2528 by Ian Wagstaff (Porter Press); and Colin Crabbe: Thrill Of The Chase by car hunter Colin Crabbe (Dalton Watson).

In an innovation introduced in the Award’s successful third year, the judges also recognised a Specialist Book of the Year, as a work representing a dedicated feat of research and endeavour. Jonathan Wood’s extraordinary book on the esoteric Squire marque, which produced just five sports cars in the 1930s in an attempt to rival Aston Martin, took that accolade for 2016. 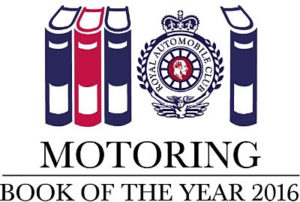 Judges for the Award were experienced book reviewers Mick Walsh of Classic & Sports Car, Gordon Cruickshank of Motor Sport, motoring writer and broadcaster Henry Hope-Frost and Keith Adams of Classic Car Weekly. They were joined in their deliberations by two leading figures from the book-selling world, Ben Horton of specialist stockist Hortons Books and Christian Whitehead of the famous London bookshop Foyles.

“We give our judges an almost impossible task in agreeing on a single title for our 2016 Motoring Book of the Year,” said Peter Read, Royal Automobile Club Motoring Committee chairman, “However, there was broad consensus that Brian Redman’s book provides an exceptional mixture of excitement, poignancy, humour and information at a relatively affordable price. It is just so readable, as well as being an important and overdue addition to the list of British racing driver biographies”.

“At the other end of the spectrum, our respect is immense for the work of Jonathan Wood in chronicling the little known achievements of Adrian Squire. It’s just the kind of book, where perhaps wide commercial prospects take second place to a venture of incredible research and writing, that our new Specialist Book Award is designed to celebrate”, continued Peter Read.

Other features of the Awards evening included one world famous author being interviewed by another as Karl Ludvigsen talked about his life and work to Graham Robson. The audience also enjoyed a lively debate on the future of book publishing with a panel of invited personalities from the motoring book world. These included Michael Sedgwick Trust chairman Peter Card, Octane journalist Mark Dixon, bookseller Ben Horton, columnist and collector Simon Taylor, and widely published author Johnny Tipler.

Expert judges – including the UK’s leading reviewers and booksellers – have now met to debate the 2016 Royal Automobile Club’s Motoring Book of the Year, and a shortlist of finalists has been chosen and includes works on unsung racing drivers and individual historic racing machines; an extraordinary history on a marque which made just five cars; the life story of a vintage car detective involved in many important ‘barn finds’; and even an intriguing novel based on a real-life Bugatti. The winner of the annual Award, now in its third year, will be announced during a unique literary evening devoted to automotive and motor sport publishing, at the Club’s historic Pall Mall home on 2 November. The event will also welcome several world-famous writers to talk about their work and debate the future of automotive book publishing. There will […]

The Royal Automobile Club has won the 2017 Surrey Heritage Award in recognition of its conversion of an 18th-century barn at its Woodcote Park estate, into a home for the Club’s heritage vehicle collection. Presented by the Surrey Historic Buildings Trust, the award was created to celebrate Surrey’s rich and diverse architectural heritage, highlighting best practice in historic building conservation and restoration. The winner was announced during a ceremony on 29 March at Loseley Park, Guildford, hosted by Michael More-Molyneux, Lord Lieutenant of Surrey and Patron of the Surrey Historic Buildings Trust. Dame Helen Ghosh, Director-General of The National Trust, was the guest speaker. Staff

On Friday 1st September, the Royal Automobile Club awarded its Club Trophy at the Concours of Elegance at Hampton Court Palace, to the glorious 1912 Rolls-Royce Silver Ghost, also known as Nellie. The owner, Katie Forrest, was awarded the Club Trophy by Royal Automobile Club President, HRH Prince Michael of Kent, beating off strong competition from the best of the best of the UK car clubs who were invited to send entries. Katie said: I’m absolutely thrilled to have been awarded this honour. Nellie has been in our family for more than 25 years and I have so many wonderful memories to share. I named her Nellie because, when she first arrived with us, she was painted in a grey colour and, being large, reminded me of Nellie the Elephant! As part of the spoils, Nellie will be making an […]